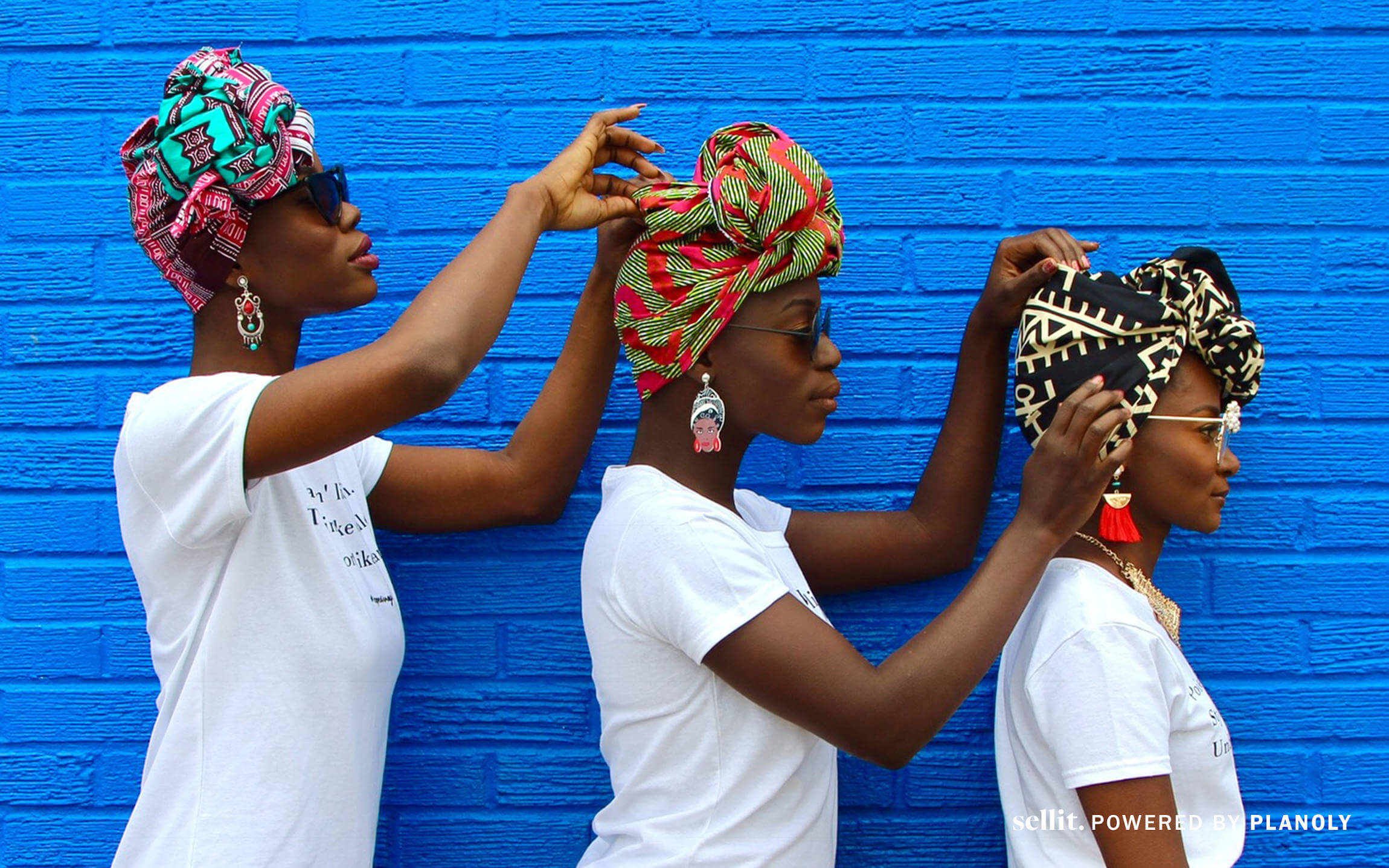 Holly is referring to the vindicating revolt when Black women remove the perm from their hair to style it in its truest form, removed from any straightening or curling chemicals. Both an acceptance of her cultural heritage and a stark protest of European beauty standards placed on Black women, Holly found power, intimacy, and comfort in her natural hair and its familiar home underneath a headwrap. Although at the time, the idea of producing and selling her own felt like an attainable but risky business venture.

“There was somewhat of a fear [starting Draped]. I knew that creating headwraps was a very, I don’t want to say small group, but there’s a very minimal set of people who wear headwraps and who identify with that culture. So I had some fears; they were also tied to being a black woman in business. I didn’t have the access that some people have concerning income. I didn’t have business capital when I founded Draped.”

Holly’s entrepreneurial leap with Draped was forced into motion in 2016, when she lost her job as a drug and alcohol counselor steering troubled lives from the breaks back towards paved roads. Confidence in her abilities and the inner desire to empower women pushed Holly forward into a new life with Draped. Where she’d apply lessons learned in her previous career to fuel the success of her calling with Draped.

“One skill I took from counseling and applied to Draped was having patience and understanding with consumer issues. Sometimes when women put on some of my clothing, they feel like they’re not trendy enough or gorgeous enough to pull off some of the outfits and head wraps. So one thing that I’ve tried to incorporate within Draped is building women’s self-esteem, giving them positive affirmations, and trying to instill that within our customer base.”

“As somebody who’s natural often, you have days where you just don’t feel like doing your hair. So I took fabric scraps that were lying around my room and started tying them in similar ways as the celebrities I saw growing up. It made me feel very queenly and powerful. There is this royal feeling that you get when you put a headwrap on or when you see a woman with a headwrap on.”

Holly’s consequential decent into African heritage and the inherent power a woman feels when wearing a headwrap hit on a cultural and emotional level. Draped acts as a modern celebration of traditional African garments and the unity women feel when wearing one. Constructed in West African fabrics and adoring Ghanaian prints, Holly’s vision evokes a deep-rooted sense of history, self-expression, and for the creator, liberating ingenuity.

“With Draped, I found some kind of freedom. Freedom in just being me. Freedom in my creation and sharing products and/or ideas with my customer base. It’s been a lovely journey creating and learning.” But Holly isn’t blinded by the bliss that comes with creating a successful Black-owned brand. As a Black woman in America, where Black Lives Matter isn’t so much a statement as it is a rallying call to the collective consciousness, Holly understands how her brand can provide light in a time of darkness.

Disclaimer: This video was recorded and produced virtually.

As Draped grew and Holly took her business on the road to largely Black gathers like Afropunk and Essence Festival, its intrinsic impact surged and brought it’s followers closer to Holly. Those relationships she birthed on the road and subsequently strengthened online, helped Draped balance sales with human impact. “A lot of the people I interact with online I get to meet face to face at these events during the summertime. My DMs are always open, so I talk to people who have reactions to some of the things I’ve said or posted. That’s how I build a relationship with my following.”

With traveling now removed from the equation, shifting Drapped to modern eCommerce solutions like sellit has created a bridge between customers and the brand. “I was kind of nervous when the whole quarantine situation started because I didn’t know what that would mean for my business. But low and behold, in some ways, it was a positive thing. I hate to say that, but it was a positive thing because I got to have intimate conversations with my followers, and because everyone is at home, they were able to spread the message of Draped.”

“I love sellit because it’s just a great platform! It’s an easy way for customers to see what you have on any social media platform. It could be on Twitter or Instagram, and using that link, customers can just shop and checkout. It’s very easy. I think a lot of beginner business owners will see how easy it is to upload designs and products. They will know the complete customer journey to purchase. It’s very simplistic for someone who’s beginning their entrepreneurial journey.”

In the decades since the onset of neo-soul and its time-honored innovators like Erykah Badu, D’Angelo, India Arie, and others, the “neo” has been omitted from the moniker as soul is a more apt identifier. Simply, the genre had outgrown the need to be bound to a sub-label. Outpacing boundaries also perfectly accentuates Holly’s perseverance with Draped. Withstanding the current economic storm through unbreakable relationships and platforms like PLANOLY’s sellit that by definition signal a pivot from high-level eCommerce roadblocks, the long-term goal of Draped endures–which is to create empowerment for women of all shades through individuality, beauty, and grace.

“I’m a big advocate for supporting women. I don’t care if they’re black, brown, white, or Asian. I want women to walk in their power and do so confidently.”

5 Fun Zoom Backgrounds to Liven Up Your Next Meeting