TikTok, formerly known as Musical.ly, made its highly anticipated US debut in August of 2018. And in just a matter of months, the youthful video-sharing app garnered hundreds of millions of downloads and set a precedent for short-form video apps worldwide.

TikTok was an immediate smash, and any adjacent app had little to no hope of flying at their height. Social media experts would quickly forecast that it was prime to outpace any video-sharing app its senior–even though its 15-second sharing parameters flush with creative tech and catchy original music were a far cry from video streaming services of the past.

Now, more than two years later–much of which has been steeped in controversy–TikTok is the most downloaded app of all-time with more than 2 billion downloads in the App Store. But the Chinese company’s success wasn’t met with a warm reception from America’s titans of tech. Facebook didn’t take this overture lying down. They soon launched a competitor, Reels, on Instagram earlier this summer.

Google had no intention of sitting out this fight either. The global brand and owner of tried and true video search engine YouTube maintains and populates more video content than anyone else on the web. So it made perfect sense when YouTube decided to take up the gauntlet with their plans for YouTube Shorts. They made their announcement this past September and describe it as “a new short-form video experience right on YouTube for creators and artists who want to shoot short, catchy videos using nothing but their mobile phones.”

When you glance at the top apps in the App Store, TikTok effortlessly anchors the number one spot. Just beneath them are two of the world’s largest companies – YouTube via Google and Instagram via Facebook. And though TikTok is far from the little engine that could, in this particular instance it almost seems so. But with YouTube nipping at their heels in that second slot, Shorts could be the new video experience that helps them overtake the reigning champ, reshaping the way creators, viewers, and even advertisers approach the platform.

At its core, YouTube Shorts is very similar to TikTok or even Reels. The feature highlights scrappy 15-second short-form videos with multi-segment camera angles, timely music clips, video speed controls, and built-in creative tools to enhance the creators' inventiveness and ultimately the viewers' experience. But YouTube isn’t a traditional social media app like its competitors. It’s a search engine, which opens up an entirely new world of discoverability.

Moreover, at least for now, YouTube Shorts won’t be a standalone app. Early reports indicate that users will be able to access Shorts within the existing YouTube framework to enable a seamless adoption period. The company reported in a dedicated blog–pinned by VP of Product Marketing Chris Jaffe–that Shorts was in early beta in India for iOS and Android users. This, of course, was a prime space for testing given the TikTok ban in India. Android users in Brazil are also among the first to test out the budding feature.

With more than 2 billion logged-in users visiting YouTube each month, Shorts’ greatest benefit for artists and creatives is discovery. Viewers seeking entertainment, connectivity, or hoping to consume information often tap into YouTube before any other platform. Creators from all backgrounds have built businesses and careers on and through YouTube. And with a huge audience that only continues to expand, Shorts opens another portal where creating snappy mobile content can evolve into something much greater.

Although YouTube today doesn’t exactly resemble the user-generated video platform it was designed to be when the company launched in 2005, Shorts seems to mark a return to form. Scrappy, short-form mobile videos currently drive social media engagement. That same strategy, years ago, made YouTube what it is today. Well, that and lots of piracy.

But after Google stepped in to purchase the company in 2006, the grand piracy cleanup began and original content was repositioned as the focus. The YouTube golden era would quickly ensue. Viewers were watching over 3 billion hours of video a month in 2011. Later that year YouTube hit a milestone tallying a trillion views. Creators cashed in on that engagement with revenue many thought to be impossible.

According to Google AdSense, creators like Jenna Marbles were making six figures from YouTube that same year. In 2012, Felix Kjellberg–who goes by PewDiePie to his fans–made waves when he dropped out of school to pursue his growing YouTube fame full-time. Needless to say, it worked out, as Kjellberg is reported to have earned an estimated $30-$50 million during his time on the platform.

YouTube can also claim a stake in breaking global stars like Issa Rae through her Awkward Black Girl web series. There’s also creative Tyler Oakley who surged following YouTube stardom. And you can’t forget musical acts like Justin Bieber, Shawn Mendes, Tori Kelly, and many others who in one way or another were discovered on YouTube. But what does this all mean as it relates to Shorts? Simply, YouTube Shorts will be at its best if it identifies and amplifies new talent, budding stars, and carves out new ways to create and consume content.

First of their kind web series like those from Issa Rae and culturally trending comedic shorts like Smosh created by Anthony Padilla and Ian Hecox can all thank YouTube for backing their ideas and providing a platform for beckoning creative talent. The same goes for the aforementioned artists who uploaded scrappy videos of acoustic tunes that eventually went viral and grew into platinum albums, Grammy nominations, and worldwide fame. Shorts, in one way or another, will be tasked with creating new stars, figuring out what comes after web shorts and podcasts, and identifying the voices and personalities that will drive those new verticals.

Shorts will be a springboard to launch new creators and emerging creative outlets while pivoting back to what made mid-2000’s YouTube so revolutionary. But to say that Shorts isn’t to some degree a reaction to TikTok would be largely inaccurate. TikTok’s emergence all but neutralized its competitors by tapping into what’s important to Gen Z and leaning on those ideals. They’ve also sharply maneuvered the finer points of brand advertising and, in a roundabout way, became a major player in music by breaking new artists and hit songs through some of their most popular creators.

Adjacent to TikTok is Instagram Reels –Facebook’s very obvious approach at leveling the playing field. Albeit a bit clunky in its earliest moments, in the blink of an eye Reels feels much more organic and exciting. And while that excitement does translate to more usage, views, and engagement, TikTok is still well out in front of the short-form video race. Yet, with shopping features coming to Reels in the near future, e-commerce could be the leg-up Reels needs to keep pace. Shorts will almost undoubtedly need to host a similar feature if they hope to pull attention from its contemporaries.

When forecasting how Shorts will compete against TikTok and Reels, the primary issue always comes back to engagement and communication, both of which are at their height on traditional social media platforms. Zoom out and sure, YouTube as a whole has more active eyes than TikTok or Reels. Unfortunately for YouTube, they aren’t where people go to send a Direct Message, share something funny with their group chat, or upload Stories from their day-to-day. It’s that level of digital normalcy and social media intimacy that YouTube is competing with.

The challenge begins and ends with convincing Gen Z and Millennials time on their platform offers the same or more value as being on TikTok, on Instagram, or watching a TikTok on Instagram. That’s the unshakeable reality for YouTube. But over time, with the right marketing and consumer buy-in, it may not prove insurmountable.

Everyday, people watch more than 1 billion hours of video on YouTube. For nearly 15 years, the company has been a cultural touchstone for entertainment and by far the most popular video consumption platform on the planet. Launching Shorts isn’t a risky move for YouTube; it’s actually an extension of what they do best.

Staying power is also on their side. They’ve outlasted other promising streaming services like Vine, OnLive, Aereo and now the most recent to falter, Quibi. Although YouTube isn’t nearly as cool or punk-rock as TikTok, there's power and consistency in being the establishment. Google, for all intents and purposes, is as established as it gets.

With hundreds of thousands of creators and artists already on YouTube creating daily, a backlog of millions of videos with 500 hours of new content being uploaded by the minute, there’s plenty of reason to believe Shorts has the headstart its competitors never did. Alongside the promise of industry experience and a built-in fanbase, Shorts should ultimately help achieve YouTube’s primary goal: keep viewers on the platform longer and inspire them to upload what they create. 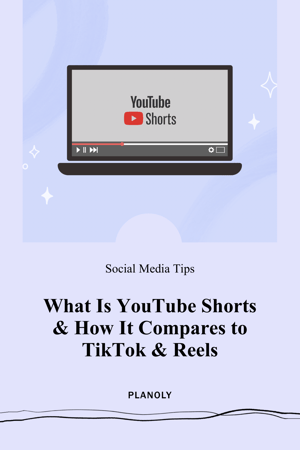 Approaching Black History Month in the Age of Digital Mindfulness

Tayden Talks Keys to TikTok Success and the Power of Authenticity