Shadowbanning takes place when a social media platform blocks a user's account in such a way that the user has no idea it’s happening.

That said, if you’ve been a victim of Instagram shadowbanning, chances are you didn’t know it took place. When a shadowban happens, your content will not appear on anyone’s feed unless they already follow you.

When under a shadowban, your visibility on Instagram is reduced drastically. So as you can imagine, your engagement rate can and likely will plummet. Marketers, content creators, and influencers have been the biggest opposers of the shadowban. Decreased engagement and a loss of followers can very literally impact their business or their ability to produce results for a business client.

As previously mentioned, Instagram says that they are very much against shadowbanning. Head of Instagram, Adam Mosseri, fields questions about shadowbanning often. In 2019, Mosseri, when asked about the practice of shadowbanning, said “Shadowbanning is not a thing. If someone follows you on Instagram, your photos and videos can show up in their feed if they keep using the feed. Being in Explore is not guaranteed for anyone. Sometimes you’ll get lucky, sometimes you won’t.”

Mosseri also spoke about hashtags, which are commonly associated with shadowbanning. Typically, users who believe they’ve been shadowbanned by Instagram complain they cannot find their content under the hashtags they have tagged with their posts. Mosseri says “Some people don’t realize this but we don’t actually show every post with a hashtag under that hashtag. We try to show people the ones that they might be the most interested in. This is to try and keep hashtag pages interesting but also to avoid spam and abuse.”

Even with such communication from Mosseri and other leaders at Instagram, what concerns many who believe the shadowban is in fact real, is a simple understanding of terminology. As Carolina Hadas put it back in 2019, “Shadowban is a term that Instagram doesn’t use. They’ve never used it, they’ve always denied it was a thing. It doesn’t mean that the things included in the shadowban label are not happening.”

Simply stated, just because Instagram doesn’t use the term shadowban, that doesn’t mean that the practice itself doesn’t take place. In fact, a few years ago, Instagram spoke specifically about some of the causes of “shadowbanning” without using the term. Further proof that shadowbanning does exist in some form even if Instagram doesn’t define it the way that others do.

Why Does Shadowbanning Happen?

Shadowbanning has actually been around since the early days of social media and the infancy of the blog era in 2006. In more recent times, however, shadowbanning has become a point of contention on Instagram as well as other social media platforms. However, the term first appeared in relation to Twitter, not Instagram.

Instagram, though, being among the most beloved social media platforms and one that arguably has the greatest financial implications, shadowbanning simply has a greater impact when it happens. But why does it happen, you ask? Let’s dig into a few of the potential causes:

How to Find Out If You’re Being Shadowbanned

So you might be asking yourself: how do I find out if I’m being shadowbanned by Instagram if I don’t even know it’s happening? Well, it’s tricky but there are ways to check and see if you’ve been a target of the Instagram shadowban.

Use Another Account - one of the quickest and most effective ways to fact check the shadowban is by creating a new Instagram post and using a few unpopular hashtags in the caption and in the first comment. Then, ask a friend to use their account and unfollow yourself. Lastly, search for those hashtags and see if your post appears in the search results – either in Top Posts or Recent Posts. If your posts don't show up in either search, you might be a target of the Instagram shadowban.

Use an Instagram Shadowban Tester - there are several tools available to test your account to see if it has been shadowbanned. One of the better options is Tribeer. Just key your account name into Tribeer’s shadowban analyzer and it will show you which hashtags are not showing your posts.

While the conversation surrounding the validity of the Instagram shadowban will continue long after this blog post, what matters today is taking the necessary precautions to make sure that, whether you believe it exists or not, you don’t get caught in its clutches. Here are a few best ways to avoid being targeted by the shadowban:

Much of the confusion surrounding the Instagram shadowban rests solely in the fact that the company doesn’t see it the way certain users do. Instagram, to its credit, is simply upholding its community guidelines to keep the platform free from abuse and/or misuse.

But whether or not Instagram accepts shadowbanning as a term or even as a practice, it’s clear that something is happening – and it’s been a consistent problem for many users. A shadowban can be frustrating and largely harmful to engagement, follower count, and more. So avoiding it altogether should be high on your priorities list.

Protect your Instagram brand with the best practices above and make sure you’re never a victim of shadowbanning. 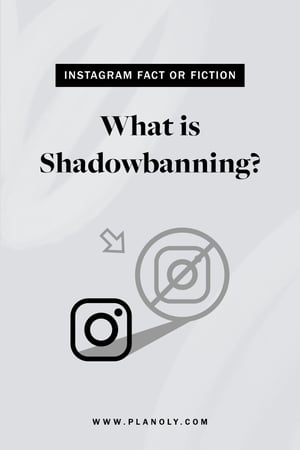 Tips On How to Get Unshadowbanned on TikTok