Last Friday, The Trump Administration announced their plans to remove WeChat and TikTok from U.S. app stores. The app removal was set to go into effect for TikTok at midnight on Sunday, September 20th. However, TikTok was able to reach an agreement with the U.S. software company, Oracle, that President Trump approved of on Saturday, September 20th. The deal will create a new U.S. company, TikTok Global, where Oracle and Walmart would own 20%. This agreement concludes weeks of drama between the Trump Administration and TikTok’s parent company ByteDance. But don’t hold your breath the deal still awaits formal U.S. approval. And if somehow you missed the TikTok saga, you can check out our past Social Spheres for the complete timeline!

The Trump Administration announced their plan to ban TikTok and WeChat, but the removal didn’t go through for either app. On Sunday, September 20th, U.S. Judge Laurel Beeler halted the plan from moving forward due to its First Amendment violations and wrongful targeting of Chinese students in U.S, students living in China, and people with Chinese business relationships. Beeler wrote, “Certainly the government’s overarching national-security interest is significant. But on this record — while the government has established that China’s activities raise significant national security concerns — it has put in scant little evidence that its effective ban of WeChat for all U.S. users addresses those concerns.”

There’s no better way to describe 2020 than this new set of  anguish emojis. The emojis were approved by Unicode Consortium and are set to hit our phones in 2021. Some emojis include: a face exhaling, face in clouds, heart on fire, and face with spiral eyes.

Many people took to social media to express their condolences for the honorable Justice Ruth Bader Ginsburg. She died Friday, September 18th. Ginsburg served on the Supreme Court from 1993 until her death. She was a champion of justice and civil rights and served and became a cultural icon in her 80s.  We will remember her for her neverending courage to fight for what’s right, even into her final days—there will never be another like her.

It was a show for the books with a record number of Black Actors winning awards. Nine out of the eighteen Emmy Awards went to Black performers, a huge contrast from the 2013 show where none were awarded. Not only was it a monumental year for the awards show, but for actress Zendaya. She is the second Black woman to win the award for lead actress in a Drama for her portrayal as Rue in Euphoria next to Viola Davis. Some of the other performers who swept at this year’s show were Anthony Anderson, Maya Rudolph, and Regina King.

Tech Stunt Adds to the Memefication of Social Movements

Tech Twitter started to light up when the string of emojis 👁👄👁 began appearing all over Twitter. Many people working in tech predicted a new app release and wanted in–and in a matter of a few days, the team responsible for the fake hype cycle collected up to 30,000 email addresses of people requesting “early access” to the “app.” What started as a joke led to the team successfully raising $200,000 for The Loveland Foundation Therapy Fund, The Okra Project, and The Innocence project, all organizations supporting the Black Lives Matter Movement.

But what seemed like a well-intentioned stunt received major pushback for its hollowness and insensitivety to the larger issue at hand. Venture Capitalist Del Johnson Tweeted, “The creation of the culture of lighthearted frivolity around a serious issue turned it into a game, which has no long-term effects.” This stunt only adds to the bigger conversation of people using social issues for viralability. The group behind the 👁👄👁 Tweeted an apology, “We moved fast, and we made some mistakes, although our intention was to use the hype cycle we see so often in tech and direct that attention to orgs that support [Black Lives Matter], the project came across to some as painting BLM as a punchline.”

Motivated to be better than the exclusive, ageist, and sexist Silicon Valley, friends Emma Salinas and Carson Poole plan to build a more inclusive system with their community Gen Z Mafia. Group Founders Salinas and Poole set up a server on Discord that now hosts hundreds of young members looking to break into the tech industry with the goal of making the industry a better place. One of the group's founders, Justin Zheng, says, “One thing we can all agree on is a willingness to get out there and build things,” he goes on to say “Yeah, we build some meme products, but we also build mission-driven things. We want to build a more positive internet, things that help people.” They’re hoping to recruit more women and people from marginalized communities to lead to more diversity for the future. They have zero tolerance for non-inclusive behavior and will remove anyone from the community not following their member guidelines. In a way, this group is protesting the industry who misunderstood them.

And just like that, you finished another edition of PLANOLY’S Social Sphere. Check back in to see if another plotline develops in the TikTok drama! 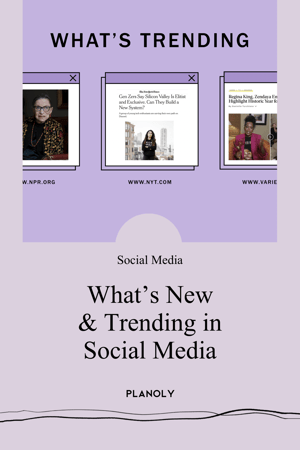