While Instagram is a great place to build community, it can also impact you negatively. But as we all grow our followings on social media, it’s essential to create boundaries and set aside time without a screen glued to your face.

We spoke to four content creators—Jessica DeFino, Christina Grasso, Jordan Santos, and Sophia Roe–about how they manage their mental health and the steps they take to protect their peace when creating content and interacting with their community.

Jessica DeFino is best known as a reporter dismantling beauty standards. The writer educates her community on the science and spirituality behind skincare with an anti-product, pro-skin approach. It’s part of her job to stay up-to-date on what’s happening and she sometimes spends up to four hours a day on social media, which in her book is too much. “Recently, I have embraced turning off comments,” she says. “I know that can be interpreted as a bad thing in this digital age not to accept comments, but I think of it as a protective measure for my mental health because I can spiral if it’s a negative. If they are positive comments, I feel the need to respond and like each one, which ends up being such a time suck. Of course, I appreciate people engaging with my posts, but it’s also so draining.”

When it comes to creating rituals around protecting her peace, Jessica will delete her social media apps when she needs to stop scrolling and get work done so that it’s not accessible. “I have a plugin for my desktop called Freedom,” she adds. “You can put in what sites you want to block and for how long. So I’ll go in and I’ll block the desktop versions of Instagram and Twitter and any other sites that I tend to scroll through when I’m procrastinating and I’ll set a timer.”

Known for her fashion and beauty content, Christina Grasso knows how to inject a bit of comedic relief into her imagery. The digital creator is also the co-founder of The Chain, a non-profit peer support network in New York City for women in fashion and entertainment coping with eating disorders. As she continuously provides support on her own channel to those recovering in addition to her usual content, Christina admits to having increased her daily social media quota. “Honestly, over the past year, I’ve started ignoring my weekly screen time notifications because it puts me in a shame hole,” she says. “Between managing my Instagram, planning content, and seeking inspiration from platforms such as Pinterest and Tumblr, it’s a lot. But for the time being, it’s also my job, so I don’t feel too badly about it.”

Being an introvert, Christina notes that social media can be really taxing, but she does enjoy interacting with her community and knows her limits. “Over the past year, social and other media have become quite overwhelming, and usually not in a good way, so it is really important to intentionally unplug,” she says. “In ordinary times, I loved taking a SoulCycle or Pilates class to recenter myself. It’s an hour where you can’t look at your phone and instead feel a really strong mind-body connection, and I can’t wait until it’s safe to return to those practices. Lately, I’ve been taking long walks through the city, journaling, and reading when I need a break from the digital noise.” 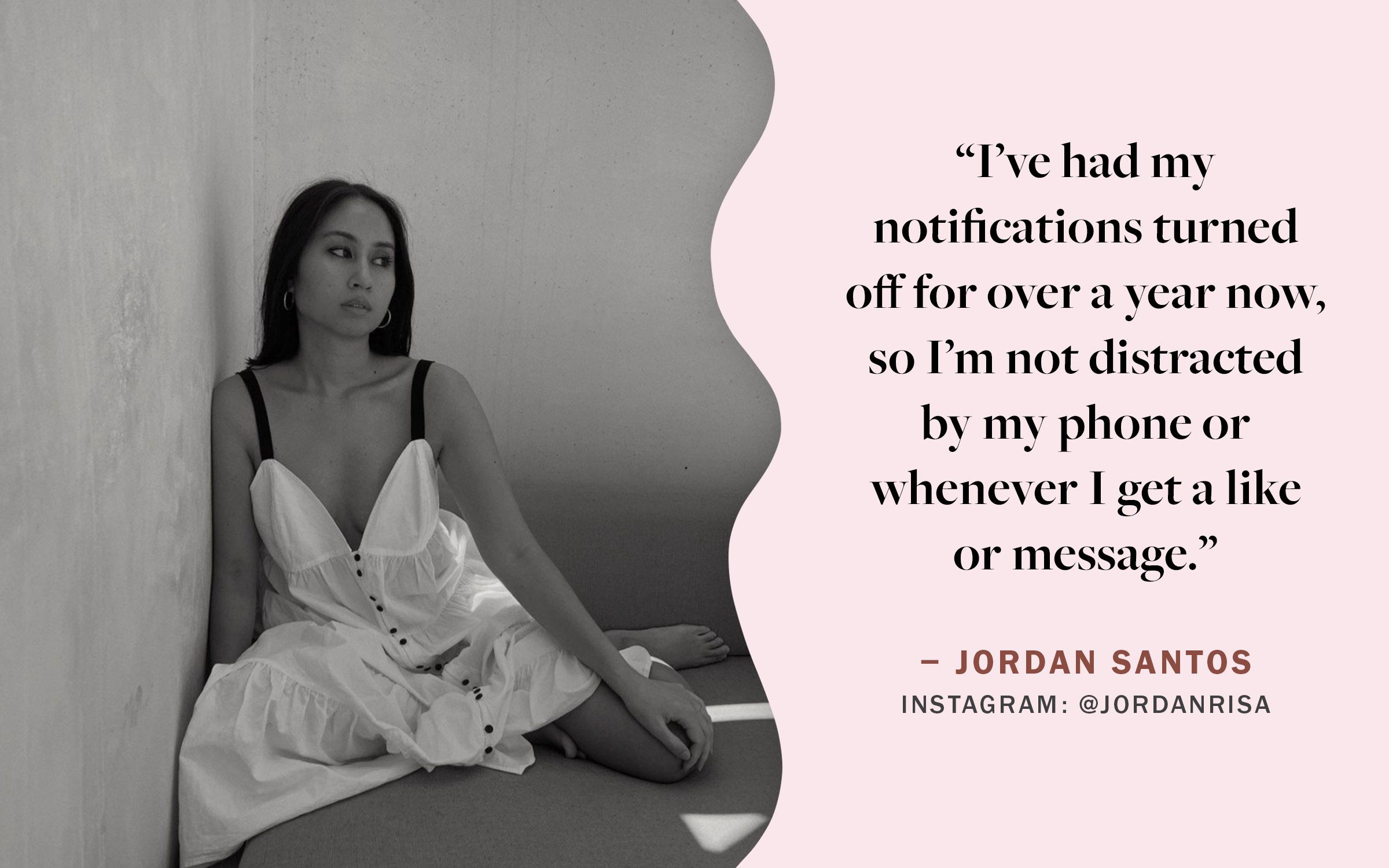 According to Jordan Santos, Los Angeles-based social media strategist and content creator, her screen time equates to about 7 hours each day. “I know that sounds like a lot, but I work in social media. I manage and consult for various brand’s social media accounts and also my own, so I’m not that mad at myself,” she says.

As someone who speaks on issues that matter, Jordan is conscious of not posting something just to be performative. “I always want to share an interesting article or call to action and that takes a lot of time and sometimes a lot of research,” she says. “I try not to let negative messages get to me because I think everyone on social media has an opportunity to speak out on what they feel passionate about. The time spent policing other people could be spent making a difference or learning more about a certain topic.”

That said, Jordan has learned to create boundaries when it comes to social media. “I’ve had my notifications turned off for over a year now, so I’m not distracted by my phone or whenever I get a like or message, which has helped a lot,” says Jordan. “I had to delete Twitter off my phone because I found myself mindlessly logging on (much like I do with Instagram.) I keep books next to my bedside so that I remember to reach for one after I realize I’ve opened Instagram for the 5th time in 10 minutes.” 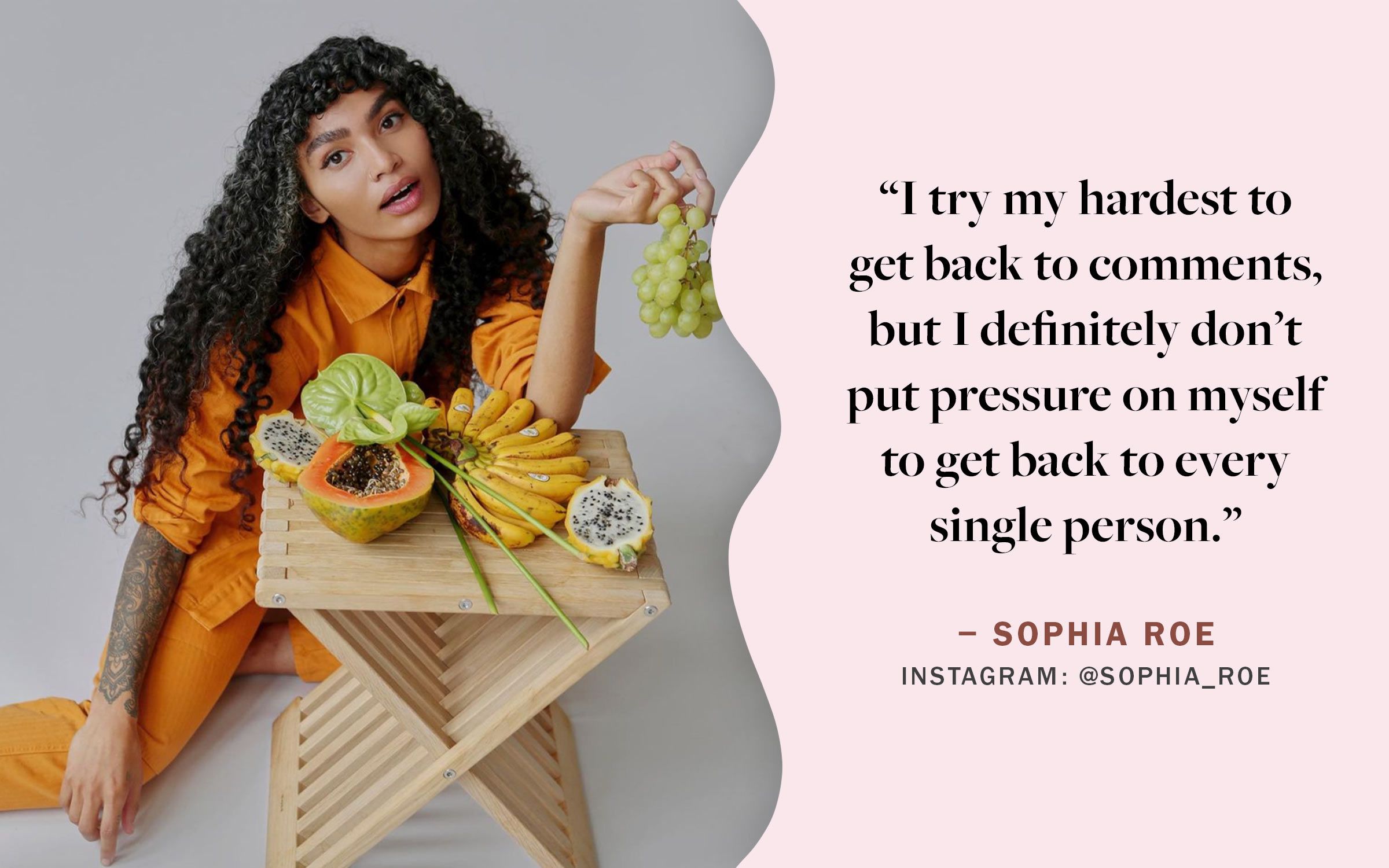 When it comes to social media, Counter Space host, chef, and activist Sophia Roe gives herself one hour a day of scroll time. “A big reason why scrolling is not good is because there’s a lot of racism on the internet,” says Sophia. “That’s something I have to deal with a lot. A lot of times, I share it. If you have a racist thing to say, I’m putting it up. I don’t want to start trouble, but I do need people to see the things that I receive so that it’s really clear that this is what a lot of Black people, gay people, trans people deal with on the internet.”

Sophia used to respond to every DM, but she’s stepped away from that, hoping to protect her peace. “My DMS are my favorite,” she says. “I try my hardest to get back to comments. When I do put something up on the grid, I spend the day managing it. I want to be helpful, but I definitely don’t put pressure on myself to get back to every single person.”

The digital creator also notes that it’s important for influencers to understand what people follow you for. “It’s okay if you can’t be that every day,” says Sophia. “Sometimes we feel this crazy pressure from a bunch of strangers. But it’s also great to want to try something new, which is really good for your mental health. But if you’re feeling pressure, then you need to put your phone away.”

Self Care Tips: How is Your Relationship with Social Media?

Influencers Weigh in on Their 2021 Social Media Strategy